I watch a cardinal peck for garden seeds beneath the snow, despite his redness, despite knowing somewhere overhead hawks circle. I’m reminded of my winter obsession with two bloody world wars, devouring books, movies, and my father the cryptologist’s 1942 war journal. I’m surprised at the waves of feelings that surge up like troops inside me: troops named The Great Generation, and We Dig In and Never Learn, and Hide Under your Desk from the Nuclear Bomb. There was once a time when winter could stop soldiers.

The very red cardinal pecks and looks around, pecks and looks around in his 360-degree predator-scan way. Somewhere, beyond sight, the hawk is running his own small prey positioning system, improved by the local conditions of red bird in snow. I think of my father, of Bletchley Park code breakers, and the French Underground; I think of the Luftwaffe, and every High Command, terrorist cells worldwide, and cellphones in Pakistani caves – all of us tracking and fearing the land, sea, and the terrible skies. How we dig in and never learn. Except in offline moments when one of us lifts a baby or kisses a parent goodbye.

[Recommended  world war books & media (among the many): The Guns of August, Barbara Tuchman; The Storm of War, Andrew Roberts; 1914 (a novel), Jean Echenoz; The English Patient, Michael Ondaatje. Grand Illusion (a film) by Jean Renoir. Gallipoli (a film) by Peter Weir.]

Mike is the wonder who designed/engineered my new website AND taught me how to upload and manage it all by my leaning-toward-Luddite self. Imaginative, upbeat, patient, kind, a great speller, and he speaks Brit, Mike and his company bigflannel work out of Brooklyn and his native London. He has the knack of leading you to the root of what you want to show/say on your website, all the while teaching you the ways of getting noticed on the WWW. Lovely experience working with Mike.

One of the joys of my work is collaborating with partners like Wondros, based in Los Angeles. Wondros describes itself as a creative playground for storytellers, strategists, innovators, designers, troublemakers, artists, dreamers, and doers. They translate ideas – often ideas for building a better world – for audiences around the globe. I work with them as a scriptwriter, tackling subjects like how to expand research for orphan diseases like NMO, or how to engage communities in the act of giving. I write all my scripts sparely, in free verse. Then the brilliant artists, designers, directors, and producers at Wondros create bold striking visual symphonies that respond to, illustrate, and support my words – always in surprising ways.

I write for the highly creative people at Lime Twig, a higher education marketing communications firm in Pasadena, California. Lime Twig specializes in capturing the culture, story, and heart of colleges and universities across the country – in image and word. Our creative collaboration and brainstorming result in vivid admissions campaigns – and in fun, engaging viewbooks, magazines, tabloids, websites, posters, and more. 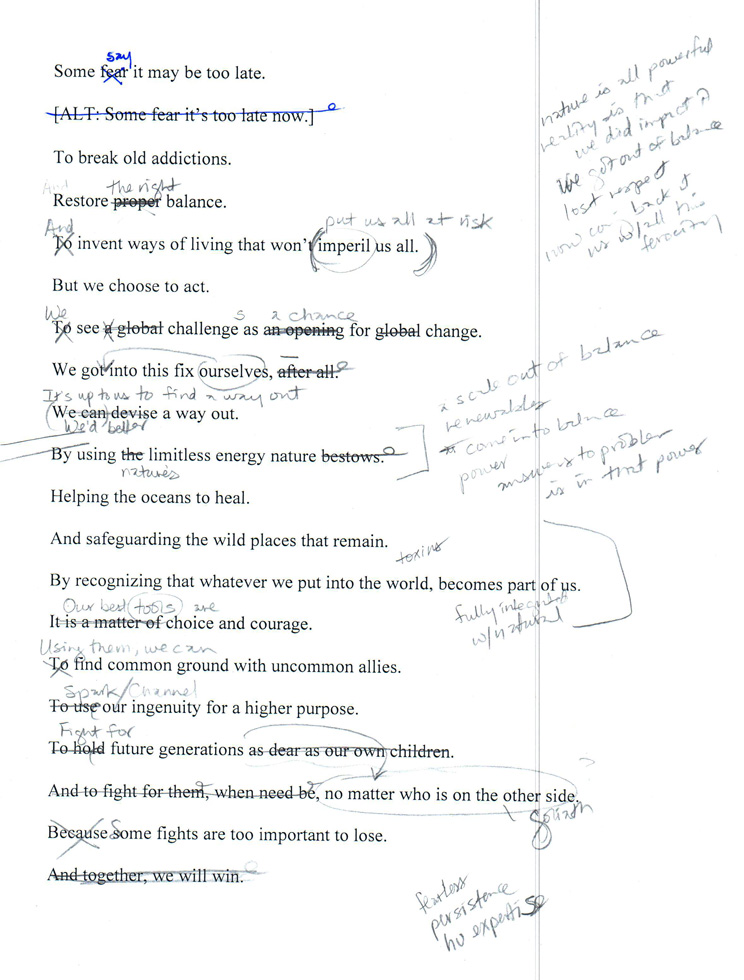 At Work: The Writing Process

At Work by Elizabeth Wray

Some video scripts go through numerous drafts before they are ready for the camera work. Click to see an edited page of a video script written for the Natural Resources Defense Council:

New Project: DreamBuilder. (A project of Thunderbird for Good)

I’m now working with Wondros on an online business skills training course that helps low-income women start or grow their own businesses. Our job is to create video profiles and animations we will weave into the online course – to support and animate the curriculum – and to engage the students in the material they’re learning. I’ll be interviewing eight successful businesswomen, who have started their companies against all odds. With help from family, the SBA, and crowd sourcing on line, these ethnically diverse women, ages 25-55, have started companies that provide metal fabrication, natural body products, online medical billing, organic food/meal prep services, and more. I’m working with Wondros to edit documentary footage into profiles, and I’ll be scripting 14 animations to enliven the course experience. Can’t wait to meet these inspiring women!